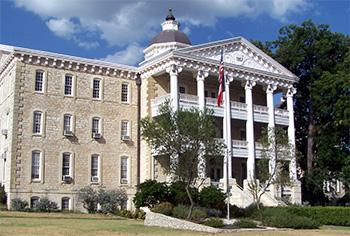 Texas lawmakers have approved almost $1 billion of new construction for the state psychiatric hospitals. These projects will modernize the facilities where Texans come to heal and increase the capacity of our state hospitals. Best-care practices require modern facilities and that means replacing some older buildings, especially at Austin State Hospital, where a new 240-bed hospital will be built.

As we replace these buildings, we’re making sure to preserve the history that lives in them and beneath them. By digitizing the old blueprints and records, documenting historic buildings, and hosting archaeological investigations, HHSC is ensuring the stories of the people who lived and worked at the Austin State Hospital remain available to Texans for generations to come.

We’re collecting and curating the stories of the Austin State Hospital, starting with the artifacts, buildings, and foundations of buildings past (the physical remains). The Austin State Hospital’s buildings, objects of daily life, and its landscape formed a contained community in which patients lived and were treated. Their remains can shed as much light on history as meticulously-kept documents. This webpage catalogs and records those resources uncovered through the campus redesign.

The Texas State Lunatic Asylum was designed in 1857 to incorporate national and global trends in treating mental illness. Before the mid-1840s, people with mental illness were kept in jails and almshouses, often with poor lighting and ventilation. Thanks to the work of mental health advocates who exposed those conditions, doctors began developing and promoting treatments based on moral dignity and respect. Following the lead of other states, which built hospitals for the mentally ill in the 1840s, Texas authorized construction of the State Lunatic Asylum in 1856.

Opening in 1861, the hospital embraced the idea that regimented daily routines, pleasant diversions, rest, and relaxation could cure insanity. The hospital set about to promote walks, exercise, weekly dances, music training, and work as a means to restore health and sanity to the people receiving care.

The Austin State Hospital campus has evolved over the years. The 19th century campus included a dance hall, a laundry facility, a bakery, a mattress factory, a carpenter’s shop, a tailor, a sewing shop, a power plant, an ice plant, a natatorium, and a barber shop. There were gardens, greenhouses, orchards, lakes, and fountains that gave the 380-acre hospital property a park-like atmosphere. The State Hospital also had its own cemetery, which was first located right in front of the original men’s dormitory. But by 1882 hospital administrators decided to move the cemetery because it presented a morbid appearance to both the residents and the public. The cemetery is now located near 51st Street and Avenue F.

Mental health of the mid-19th century is a far cry from what we know today. Like all institutions, Austin State Hospital suffered from the social ills of the day, including segregation, systemic racism and disparate treatment. Today the hospital has space for about 250 patients, including children and adolescents. Our knowledge and treatment of mental health has greatly advanced. That includes the knowledge of how open spaces, privacy and natural light aid in the healing process. As part of the Austin State Hospital’s redesign plan, some of the campus’ aging buildings will be torn down and replaced with structures that will incorporate prevailing mental health principles into the new campus design.

The Austin State Hospital investigations are uncovering architectural remains from many former buildings, along with personal effects, that bring the campus history to life. Buttons, jewelry, bottles, serving utensils, and ceramic fragments help archaeologists expand the stories that are already documented, and tell new ones.