Texas was among the first 30 states chosen to participate in the Money Follows the Person Demonstration (MFPD) in 2007. As of June 2016, 43 states participate in this federal demonstration designed to help older adults or persons who have disabilities move from institutional settings back into their communities.

MFPD provides federal grant funding as well as funding from Medicaid matching cost savings [1], as defined at the bottom of this document.> to assist states in moving individuals from institutions to the community. In fiscal year 2016, HHSC has budgeted over $16 million in federal funding to help individuals transition out of nursing facilities, State Supported Living Centers, Intermediate Care Facilities for Individuals with Intellectual Disabilities and other institutions. Funds are also used to provide behavioral health supports that help individuals remain living in the community, enhance opportunities for integrated employment for greater self-sufficiency, and increase the availability of affordable, accessible housing.

The charts below show another significant impact of MFPD in Texas. As the line chart indicates, the MFPD has helped over 10,000 individuals transition from institutional to community-based services. Another 34,598 transitioned under the Texas Promoting Independence initiative. The Promoting Independence initiative includes all transitions from institutions to communities, and not just those in which an enhanced Federal Medical Assistance Percentage (FMAP) is received. 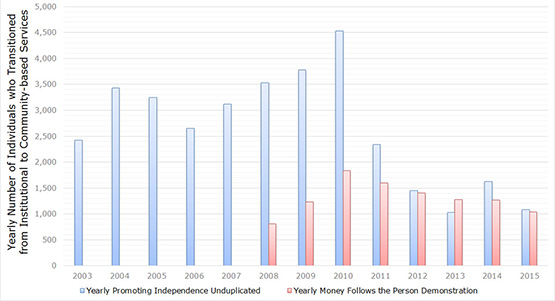 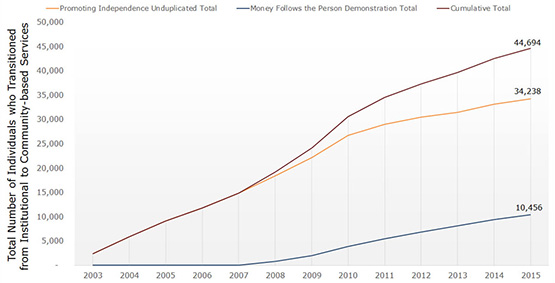 Click this button to scroll back to the top.